From the Grand Master of The Grand Lodge of Israel

Freemasonry, which was founded in England in the eighteenth century, is symbolically based on the building of the Temple in Jerusalem by King Solomon.  In the world and in Israel there are many organizations such as Bnei Brit, Rotary, Lions Club, and many more.  All of them are highly respected and all of them are involved in giving back to the community.  So what sets us apart from the others?

First, we are a non-missionary organization, that is, the Freemasons do not recruit members. Whoever is interested in joining us, must be clean of any moral blemish and his good name must precede him.

Second, being a Freemason requires constant education in our way of life based on principles of high morals such as freedom, equality, fraternity and the protection of human rights.

The moral teachings of Freemasonry are taught by rituals that include allegories and focus on various symbols, according to traditions passed down from time immemorial.

Despite the fact that the moral teachings are based on the tradition of the construction of the House of God in Jerusalem, Freemasonry is not a religion. 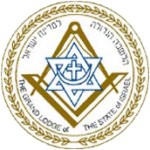 In our lodges, Christian, Muslim, and Jewish brethren sit side by side working together for humanity. Under the auspices of the Grand Lodge of The State of Israel, there are approximately 70 lodges operating throughout the country. From Nahariya in the North to Eilat in the South, through the Galilee, Metropolitan Tel Aviv, and the Negev. The unifying principle that makes Freemasonry in this Land so unique is the actualization of the principles of Freemasonry for equality and coexistence in peace and brotherhood. These true principles of harmony and brotherly love are expressed in the emblem of the Grand Lodge. Israel is a country of immigrants and there are lodges that operate in different languages: Hebrew, Arabic, English, French, German, Spanish, Portuguese, Romanian, Turkish and Russian.

The Grand Lodge of  The State of Israel is located at 11 Ben Gurion St. (5th floor) in Bnei Brak, where in addition to the lodge rooms there are the offices, the refectory, the museum with its many exhibits and the library, which is rich in books.

We do not engage in “conspiracies” and we demand that the brethren obey the laws of this country in which they reside.

The Order of Freemasonry exists in all democratic countries, and the Grand Lodge of The State of Israel maintains close ties with 175 Grand Lodges throughout the world.

In order to gain some perspective on Freemasonry you can look at a list of famous brothers and their accomplishments.

We find in any such list of famous Freemasons, 15 the Presidents of the United States, various Heads of State such as Churchill and Benjamin Franklin; Freedom Fighters such as David Crockett, Lafayette, Pancho Villa, and Simón Bolívar.

It should be noted that the great thinkers of the French Revolution were also mostly Freemasons, including Danton, Robespierre, Voltaire and many more.  Among other Masons you can also find Kings (England), writers (Kipling), musicians (Mozart), and many artists (John Wayne, Laurel and Hardy, Clark Gable and many other well-known actors).

Many Freemasons are responsible for:

The enactment of many laws for the sake of humanity in many countries.

Limitation of working hours for women and children.

Separation of religion and state,

The right to vote from the age of 18.

The abolition of slavery.

The contribution of the Freemasons is similar across the globe.

The common factor for all these activities, is that they are always done discreetly.  Among the activities engaged in by the Freemasons in Israel we find:

The awarding of scholarships starting from elementary schools through high schools and up to the university level.

Donations to many charities such as: “Al Sam for the treatment of addictions”, hospitals, hospices, and nursing homes.

Donations of food baskets for the needy,

Financial assistance for medical treatments in Israel and abroad.

The purchase of school books and bags for needy students.

Hearing aids for the needy.

Guided tours for the blind.